The days leading up to September 10 were very busy, not only in my personal life, but at the office and with our staff.  Making sure that before we left that Friday we had all our equipment away from windows, stuffed in closets and covered with trash bags, just in case.  Everything was moved but the desks.  It had been a long time since the desks were that empty, almost like we were moving either into or out of this office.  Also, keeping in contact with the staff to make sure everyone was safe.  The plan was that I would text everyone several times a day and they needed to respond to me that all was okay.  They did a great job keeping up with this throughout the storm and afterwards.

Leading up to the weekend, I had been preparing at home.  Making sure my truck had a full tank of gas, going to the grocery store to make sure I had food to eat and that did not include items that required refrigeration.

I did not board up my windows and some people thought I was crazy for two reasons, number 1 for staying in Florida and number 2 for not boarding up my windows, if I was staying.

So let's address number 1, staying in Florida.  Yes, I did stay, do I regret it, no!  This is my home and yes everything can be replaced, but you still have that attachment to those "things".   I removed items from tables, covered my clothing in the closets with plastic. I had also taped my windows with duct tape, just in case they did break the tape would grab some of the glass. My neighbor got sand bags and we placed them at the slider to help with any flooding that may have taken place and we had some at the front door as well.  You see when we have a lot of rain our street floods.

Here is a picture I had taken the night before, who would have thought a storm was headed our way.

It was an amazing sunset.

The day of the storm we were ready, watching The Weather Channel guys reporting live from Naples, Florida, which is about 30 miles south of us.  They were expected to take a hit from Irma.  Then changing to the local stations.  I had my radio all ready, all electronics were charged, I had been making ice the entire week.  I also had my a/c turned down to 74 to keep it as cool as possible.  Then at approximately 2:30p Sunday afternoon the power went out.  You see, it had been raining since about 11a and the wind was picking up, it was crazy.  The neighbors and I were outside just passing time, the kids were playing the street as it was already starting to flood.

THEN about 5p the wind picked up and not only1 but 3 carports were ripped from homes, in another building on our street. The debris was becoming projectiles.  The neighbor went out and pulled in what he could to another neighbors home's screen in patio.

About 6:30p my neighbor text me that it was time to get in your safe place.  So I got my dogs and headed to the closet in the downstairs bathroom.  It wasn't very big and I was hoping it would be just for a short period of time, which it was. 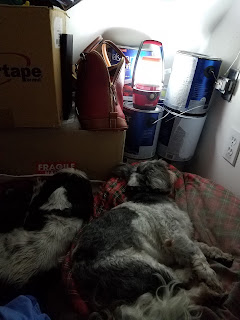 From what everyone was telling me, I was expecting to hear a difference in sounds in the house.  But that did not happen.  I had all the doors closed and towels stuffed under the bottoms to keep the pressure somewhat the same.  I did not notice anything different and that is because the storm had moved just a little east of us and we did not get the eye of Irma.

Unfortunately, for those living in Everglade City and Marco Island, that is where the storm made landfall.  By 7:30p the storm had rolled through our area.  Unlike Hurricane Charlie several years ago, there was more landscaping damage with Irma, than roof damage here.  Please do not get me wrong, there was damage to homes with storm surge and flooding and also roof leaks.  Fort Myers and surrounding areas look unbelievable.

Here is our street the next morning, looking both directions 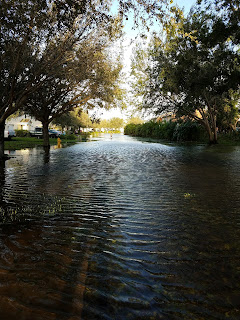 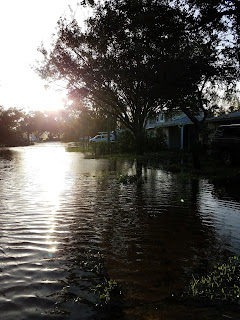 It only took about 3 days for all the water to drain away.  We were very blessed to not have flooding in our homes.

Our office was closed, no electric or Internet.  The electric at the office was restored by Wednesday and by the end of day Thursday, it was restored at Doggie Daycare.  My home, not so much.
I had taken the dogs to daycare and then boarded them. It was too hot in the house for them and I was driving around at least 2 times every day to cool them down and to find a strong cell service. The house was like a sauna and I was going to the office to work using my hotspot.  That is another long story.

The electric in our community was restored 6 days later.  You would have thought we won the lottery. 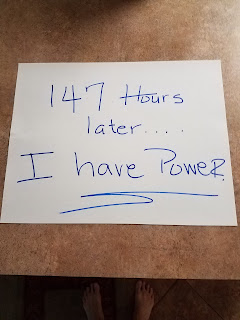 So you may ask, would I stay during another storm and that answer is YES.

I will be replacing my sliding door with a hurricane resistant one and also looking into a whole house generator.  I'm not sure how that will play out but it is work looking into.

I did have to throw out everything that was in my refrigerator.  Luckily, I did not have a lot in there.

Life is back to normal and the cleanup has begun.  It will take a very long time for the cleanup to be complete. Keep those that have lost their homes from this storm in your prayers.

Have a great weekend! 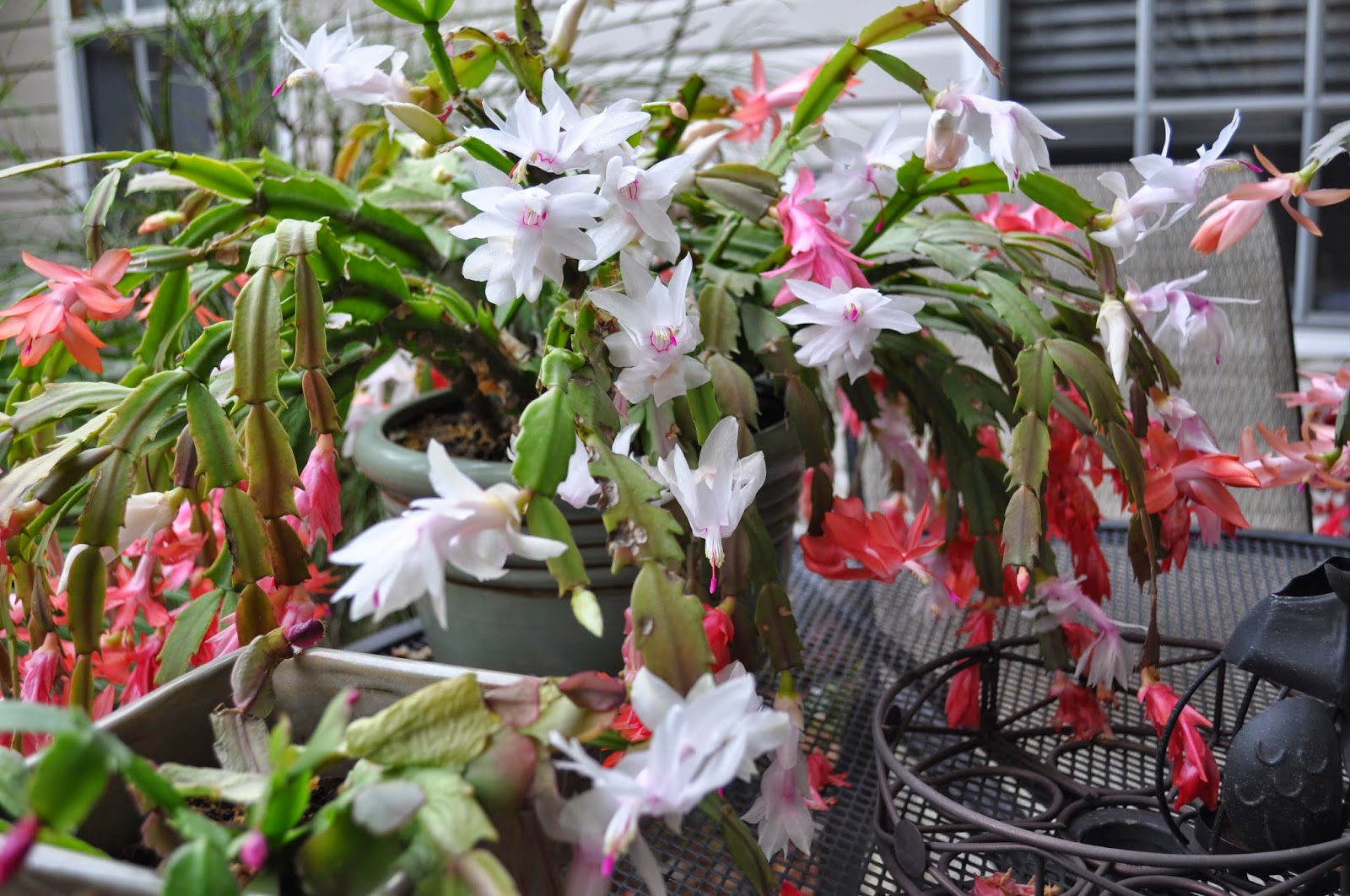